My husband, on the other hand, was gifted with a kick-ass Zedye that he was kind enough to share, at least for a little bit.  We spent an afternoon cruising around Detroit, in one of those old steel-box American cars, cars so long that seem to take up the entire block.  Cars that don’t even have a word in their language for “hatchback.” 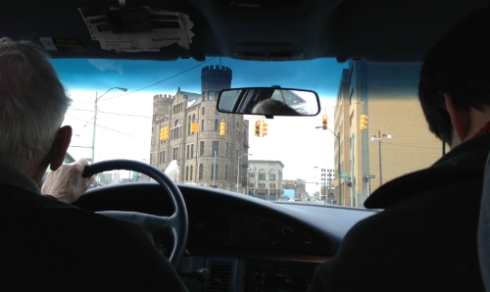 I had a list of old crumbling buildings to see and Zedye was willing to humor me,  but for him, the point of the trip was the Fischer Building.

I took over 600 pictures on that trip to Detroit, at least 100 of the Fischer building; it is by far the sight to see.

The security guards teased me about how many pictures I was taking; that they were going to charge me $20 a photo.  Zedye was having none of it.  They couldn’t charge me because he was older than the Fischer building.

It was an argument brilliant in its irrationality and its simplicity.  He was, in fact, older.  He even showed his driver’s licence to prove it.  Yet, being older didn’t prove anything.  Zedye was just feisty like that.

I really liked this guy’s shoes

Obama was, arguably, one of the best branded presidential candidates of all time.  The visuals, the message of hope and change, it was all one organized package.  So it’s surprising that this is almost the anti-branding campaign year, epitomized by this quote from today’s NYT:  “I voted for the more electable not-Romney,” In case you were wondering, that’s Santorum who should have enough brand identity of his own.  But particularly this year, it’s all who people aren’t, not who they are.  Romney is the not-Obama, Santorum and Gingrich are the not-Romneys.  I’m hoping that Obama returns to his brand and doesn’t follow this year’s pattern, otherwise this will be a particularly unfortunate mess of not-not-nots.

My blind proposal (as mentioned here) was successful and I’m in the whirlwind midst of a project on community on web boards.

I’ve always been fascinated by how people create identity, off-line of course, but online as well, where you have full control on how you are, how people see you.  You can be whoever you want to be and while there’s certainly a lot of that, the internet is full of people being, mainly, themselves.  Community seems like a natural offshoot of that, how people create genuine interactions and then relationships.  So excited about this project, plus I’m getting to help a non-profit and it feels like I’ll really be improving something.  Plus it’s great experience for my big project/business model thingie.