My organized evil twin is not me

I am obsessed with systems in an almost I long to be a left-brained person way. Linear, pragmatic, solution-based, I’ve convinced myself that systems can be created to crack the code on looking chic everyday, cooking dinner, staying fit, saving money, and producing good creative work. According to this as yet untested theory of mine, the only difficult part should be finding your system.  – Sarah from Pink of Perfection

I recently read the above and went YES THIS!  I crave being a orgnaized, systematic person.  Make a to-do list, cross it off, and have that glow of productivity and satisfaction every day, surrounded by my clean horizontal surfaces and things filed away.  Just find the one trick, the one system, or pen color, or type of box and BOOM!  Awesome killer adulty-type-person.  Sadly, no trick, pen, or box has kept me from often feeling like below :

Closer to reality from Hyperbole and a Half

I know I’m not the only one, so I’m going to share a few things I have managed to figure out that do help me and hopefully will help you too.

What about you?  What tricks and treats do you use to make things work for you?

Posted in About Kat, Goals

The Freedom and Perils of Living Alone – I think I’ll need to be with someone who has lived alone. We can commiserate and help each other resocialize.  Feral people living alone?  I like it!  How much of our co-habitating behavior is socialization, how much is performative?  One big takeaway – marketing needs to focus on the one-person household, not just the traditional female HH shopping model.

How Companies Learn Your Secrets –  “But even if you’re following the law, you can do things where people get queasy.”  Take away lesson, quant is creepy!  Actually, I found the pushback to this article really interesting – it’s clear that most people aren’t aware of how much data is collected on them every single bit of every single day and how much effort is spent trying to manipulate their behavior.   Also of interest, how much of the article was on using the same science to hack your own behavior – in that way it’s almost a little bit of an advertisment for the writer’s book (speaking of incentivizing behavior).

I love vending machines so I had to check out the new Walgreen’s flagship that had not just sushi, a manicure bar, and the most wine I’ve ever seen outside a liquor store, but also several information kiosk-y type things.  My favorite was the virtual bartender – put in your base liquor, a few flavor preferences, and get a list of cocktails.  For your convenience, you can either email or print out the recipe, complete with shopping list (we went with the key lime creme pie martini). 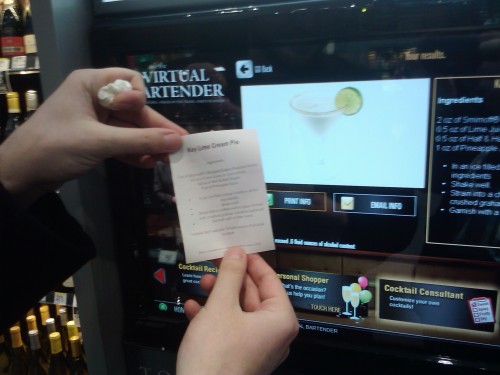 Swallowing my heart in my throat and running with it

I am a freelancer.

Specifically, I’m a freelancer who left her job in a crappy economy because it wasn’t right for her.

I know what you’re saying, shaking your head at me. Security is important, a regular pay check is important, being gainfully employed is important.  There may even be some mutterings on being spoiled, those Millennials and their…. expectations.  And those are all valid things to say when you don’t know the full story and maybe someday I’ll share.  But today, today is about the excitement of freelancing, of being my own boss.

Working for myself means that I can go with my gut, write to a stranger and pitch an idea or ask for some mentoring.  People are awesome and giving when you work for yourself, especially when it’s new and you’re so so excited and scared and it’s written all over your face.

I’m getting in some quality coffee shop time today – daydreaming and writing proposals and emails that will probably lead to nothing but may, oh may, lead to something cool and awesome.  I’m terrified and it’s the best feeling in my life, to face my fears and really reach for my goals.

P.s. I believe in sharing!  If there’s anything that I can do for you, any help or mentoring or anything, please contact me.  Good luck should always be shared!

Posted in About Kat, Work

Last week, Jason Wu’s new line for Target came out and within hours, it sold out.  For Target and Jason Wu, a success, but it was a huge bummer for those who wanted to purchase, with resellers clearly picking up a lot of the merchandise, including nearly all of it in a store in Miami.  It’s a good deal for resellers – if they can’t sell at a profit on eBay, they have 8 weeks to return it to the store.  But who are the people who buy off eBay and, more importantly, what can Target do to take advantage of all that untapped desire.  After all, the resellers are the ones fully maximizing demand while raising ire at both them and Target

Buyers come into two types.  a) People who really want a particular item and b) people who are really excited about having something from a designer.  That second group is the one that I think Target can really gain more from.

Obviously, Target doesn’t want to make a lot of product, diluting either Jason Wu’s brand or the concept of Designer for Target.  But what if they made one item in larger numbers, say the cat t-shirt that while emblematic of Wu’s style doesn’t imitate the items he regularly sells.  Enough stock means that it’s less appealing to resellers* and that items stay in stock long enough for more fans to purchase; people who are excited about the line instead of a particular item get to purchase from Target.

I’m sure there’s a reason why Target does do it that way – designer pressure maybe – but it’d be interesting to see them try it out and see the fan reaction, which is currently not so high.

*  Looks like the demand price on eBay, two weeks out, is around $5 more than the set price, where most resellers seem to want around $15 more ($25 vs $35).  Price pressure for the bags seems to remain high

An aesthetic snafu is a sign from the universe.  Something unexpected, unplanned, perhaps a mistake or mix-up but something disruptive that’s also beautiful.  A message to change your thinking, sometimes quite literally.  The original aesthetic snafu story goes something like this….

I was in Mexico in March.  It’s bright and sunny, too bright and sunny and I’m sweating…in March.  I finish up my cold, crisp Mexican Coke, sugar and in a bottle like it should be, and go to head back over the boarder.  Only one obstacle stands in my way – not customs or emigrations, but the world’s longest train.  It started 15 minutes earlier and shows no sign of stopping.  And then I see

and I realize that the train is going to win and that I should just go and get another Coke, which I do and it’s even more delicious than the first, joining me in sweating…in March.

Note: It must have really been a beautiful mixup – it took until now, despite having this picture above my desk for several years, to realize that it’s more likely to be ascetic than aesthetic.  Oops!

Posted in About Kat