Multitasking and other skills

As things have wound down for me a little bit – it’s summer in South America, my clients are on vacation; post-Christmas is a slow time for market research – that I’ve stopped being so multitasky.  Oh I’m still unable to watch TV or listen to music by themselves.  That ingrained of a habit can’t be changed by the weather or new ideas.  I just get wrapped up in things and leave others by the wayside.  See blogging for two days, making a whole pile of half drafts, and then ignoring it all for a week.  I just can’t focus on them, fix this line or that, come to any sort of point.  They bounce around with the dust bunnies in the corners, but that doesn’t do anyone any good.  I even pushed my new academicy friend to write a paper on one of them, despite having a few pages of half-notes myself.*

This is what I’ve been working on instead: 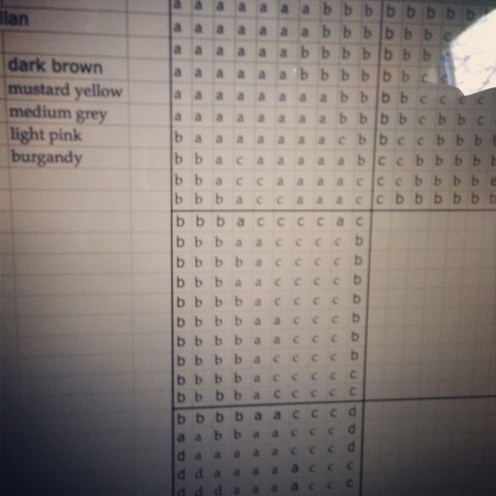 My long lingering embroidery pattern that I hope to release out into the world for feedback and to begin a profitable pattern empire.  I’m already noting my next one, spring and Paris, with the goal of releasing it for sale before the appropriate season is over (this one is sadly autumny).  You wouldn’t believe how fulfilling typing in little letters in groups of a hundred while squinting at tiny stitches is – I can’t even really believe it myself.  My resume also says detail-oriented and I did spend three months in the basement of an art library shelf-reading Dewey decimals to ten places, but still.

I spent a morning buying handfuls of floss and afternoons on downloading nearly as many wingding fonts trying to find the perfect one.  I can’t wait until I get the pattern back from my beta** but I’m trying to keep my emotions locked down.  My excitement is tempered with worry, of the let-down if there’s not any interest, and the new depression that would come after.  I hate that I crave approval and praise from others; that the existence of something I created isn’t enough, despite the fact that creating a pattern is only for other people anyhow.  Blah, emotions.  This instead:

*Not that I would write a paper for publication myself.  I miss academia something wicked, especially now, but the idea of writing a lit review makes me prickly all over.

** Which is, yes my mom.  In my defense, she once did seven pieces, Henry the 8th and all his wives, in maybe two months.  I expect her to get the pattern, do it, and send it all back before I finish it myself.  Also she’s retired and therefore needs things to do, lest she get herself in trouble.

This entry was posted in About Kat. Bookmark the permalink.